His paintings, and biography
Sponsored Links 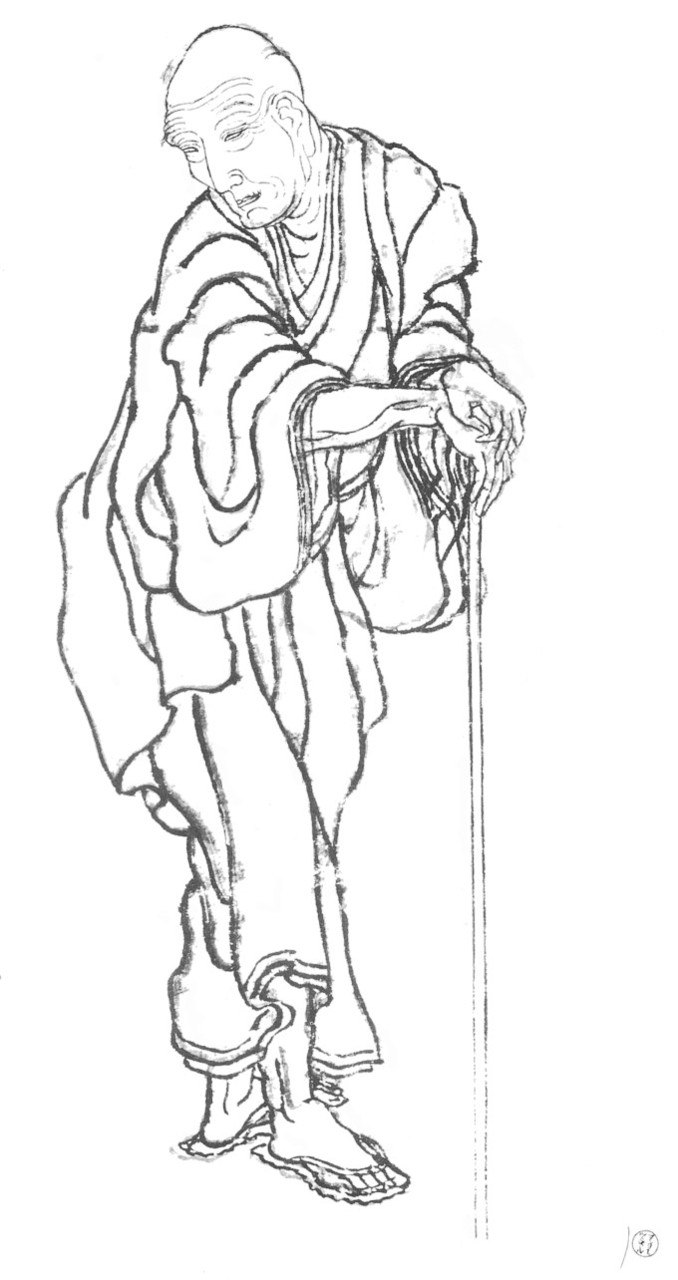 Katsushika Hokusai (October 31, 1760 - May 10, 1849) was a Japanese artist, ukiyo-e painter and printmaker of the Edo period. He was influenced by such painters as Sesshu, and other styles of Chinese painting. Born in Edo (now Tokyo), Hokusai is best known as author of the woodblock print series Thirty-six Views of Mount Fuji (Fugaku Sanjuroku-kei, c. 1831) which includes the internationally recognized print, The Great Wave off Kanagawa, created during the 1820s. Hokusai created the "Thirty-Six Views" both as a response to a domestic travel boom and as part of a personal obsession with Mount Fuji.[3] It was this series, specifically The Great Wave print and Fuji in Clear Weather, that secured Hokusaiâs fame both in Japan and overseas. As historian Richard Lane concludes, "Indeed, if there is one work that made Hokusai's name, both in Japan and abroad, it must be this monumental print-series...". While Hokusai's work prior to this series is certainly important, it was not until this series that he gained broad recognition and left a lasting impact on the art world. It was also The Great Wave print that initially received, and continues to receive, acclaim and popularity in the Western world.

Hokusai's date of birth is not known for certain, but is often said to be the 23rd day of the 9th month of the 10th year of the HÅreki era (in the old calendar, or October 31, 1760) to an artisan family, in the Katsushika district of Edo, Japan. His childhood name was TokitarÅ. It is believed his father was the mirror-maker Nakajima Ise, who produced mirrors for the shogun. His father never made Hokusai an heir, so it is possible that his mother was a concubine. Hokusai began painting around the age of six, possibly learning the art from his father, whose work on mirrors also included the painting of designs around the mirrors.

Hokusai was known by at least thirty names during his lifetime. Although the use of multiple names was a common practice of Japanese artists of the time, the numbers of names he used far exceeds that of any other major Japanese artist. Hokusai's name changes are so frequent, and so often related to changes in his artistic production and style, that they are useful for breaking his life up into periods.

At the age of 12, he was sent by his father to work in a bookshop and lending library, a popular type of institution in Japanese cities, where reading books made from wood-cut blocks was a popular entertainment of the middle and upper classes. At 14, he became an apprentice to a wood-carver, where he worked until the age of 18, whereupon he was accepted into the studio of Katsukawa ShunshÅ. ShunshÅ was an artist of ukiyo-e, a style of wood block prints and paintings that Hokusai would master, and head of the so-called Katsukawa school. Ukiyo-e, as practiced by artists like ShunshÅ, focused on images of the courtesans and Kabuki actors who were popular in Japan's cities at the time.

After a year, Hokusai's name changed for the first time, when he was dubbed ShunrÅ by his master. It was under this name that he published his first prints, a series of pictures of Kabuki actors published in 1779. During the decade he worked in ShunshÅ's studio, Hokusai was married to his first wife, about whom very little is known except that she died in the early 1790s. He married again in 1797, although this second wife also died after a short time. He fathered two sons and three daughters with these two wives, and his youngest daughter Sakae, also known as Åi, eventually became an artist.

Upon the death of ShunshÅ in 1793, Hokusai began exploring other styles of art, including European styles he was exposed to through French and Dutch copper engravings he was able to acquire. He was soon expelled from the Katsukawa school by ShunkÅ, the chief disciple of ShunshÅ, possibly due to studies at the rival KanÅ school. This event was, in his own words, inspirational: "What really motivated the development of my artistic style was the embarrassment I suffered at ShunkÅ's hands."

Hokusai also changed the subjects of his works, moving away from the images of courtesans and actors that were the traditional subjects of ukiyo-e. Instead, his work became focused on landscapes and images of the daily life of Japanese people from a variety of social levels. This change of subject was a breakthrough in ukiyo-e and in Hokusai's career. Fireworks at RyÅgoku Bridge (1790) dates from this period of Hokusai's life.

The next period saw Hokusai's association with the Tawaraya School and the adoption of the name "Tawaraya SÅri". He produced many brush paintings, called surimono, and illustrations for kyÅka ehon (illustrated book of humorous poems) during this time. In 1798, Hokusai passed his name on to a pupil and set out as an independent artist, free from ties to a school for the first time, adopting the name Hokusai Tomisa.

By 1800, Hokusai was further developing his use of ukiyo-e for purposes other than portraiture. He had also adopted the name he would most widely be known by, Katsushika Hokusai, the former name referring to the part of Edo where he was born and the latter meaning, 'north studio'. That year, he published two collections of landscapes, Famous Sights of the Eastern Capital and Eight Views of Edo. He also began to attract students of his own, eventually teaching 50 pupils over the course of his life.

He became increasingly famous over the next decade, both due to his artwork and his talent for self-promotion. During a Tokyo festival in 1804, he created a portrait of the Buddhist priest Daruma said to be 600 feet (180 m) long using a broom and buckets full of ink. Another story places him in the court of the Shogun Iyenari, invited there to compete with another artist who practiced more traditional brush stroke painting. Hokusai's painting, created in front of the Shogun, consisted of painting a blue curve on paper, then chasing a chicken across it whose feet had been dipped in red paint. He described the painting to the Shogun as a landscape showing the Tatsuta River with red maple leaves floating in it, winning the competition.

1807 saw Hokusai collaborate with the popular novelist Takizawa Bakin on a series of illustrated books. The two did not get along due to artistic differences, and their collaboration ended during work on their fourth book. The publisher, given the choice between keeping Hokusai or Bakin on the project, opted to keep Hokusai, emphasizing the importance of illustrations in printed works of the period.

In 1811, at the age of 51, Hokusai changed his name to Taito and entered the period in which he created the Hokusai Manga and various etehon, or art manuals. These etehon, beginning in 1812 with Quick Lessons in Simplified Drawing, served as a convenient way to make money and attract more students. The first book of Hokusai's manga, sketches or caricatures that influenced the modern form of comics known by the same name, was published in 1814. Together, his 12 volumes of manga published before 1820 and three more published posthumously include thousands of drawings of animals, religious figures, and everyday people. They often have humorous overtones, and were very popular at the time.

In 1820, Hokusai changed his name yet again, this time to "Iitsu," a change which marked the start of a period in which he secured fame as an artist throughout Japan (though, given Japan's isolation from the outside world during his lifetime, his fame overseas came after his death). It was during the 1820s that Hokusai reached the peak of his career. His most famous work, Thirty-six Views of Mount Fuji, including the famous Great Wave off Kanagawa, dated from this period. It proved so popular that Hokusai later added ten more prints to the series. Among the other popular series of prints he published during this time are A Tour of the Waterfalls of the Provinces and Unusual Views of Celebrated Bridges in the Provinces. He also began producing a number of detailed individual images of flowers and birds, including the extraordinarily detailed Poppies and Flock of Chickens.

The next period, beginning in 1834, saw Hokusai working under the name "GakyÅ RÅjin Manji" (The Old Man Mad About Art).[8] It was at this time that Hokusai produced One Hundred Views of Mount Fuji, another significant landscape series. In the postscript to this work, Hokusai writes:

From around the age of six, I had the habit of sketching from life. I became an artist, and from fifty on began producing works that won some reputation, but nothing I did before the age of seventy was worthy of attention. At seventy-three, I began to grasp the structures of birds and beasts, insects and fish, and of the way plants grow. If I go on trying, I will surely understand them still better by the time I am eighty-six, so that by ninety I will have penetrated to their essential nature. At one hundred, I may well have a positively divine understanding of them, while at one hundred and thirty, forty, or more I will have reached the stage where every dot and every stroke I paint will be alive. May Heaven, that grants long life, give me the chance to prove that this is no lie. ”

In 1839, disaster struck as a fire destroyed Hokusai's studio and much of his work. By this time, his career was beginning to wane as younger artists such as AndÅ Hiroshige became increasingly popular. But Hokusai never stopped painting, and completed Ducks in a Stream at the age of 87.

Constantly seeking to produce better work, he apparently exclaimed on his deathbed, "If only Heaven will give me just another ten years... Just another five more years, then I could become a real painter." He died on May 10, 1849 (18th day of the 4th month of the 2nd year of the Kaei era by the old calendar), and was buried at the SeikyÅ-ji in Tokyo (Taito Ward).